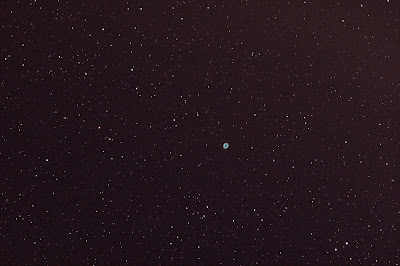 This is my first image of the Summer and is really just a quick test of the gadgets I've made/bought over the past few months. As usual, after spending several hours setting up the telescope and imaging bits then waiting for the sky to darken a bit, I only managed 5 minutes photography before the clouds rolled in and the Moon came out to play. The image is a single 30second exposure of M57, but taken through a coma corrector which, at first glance, seems to have done a good job. I've purposefully left the image un-cropped so you can see the stars right at the edge of the field, these would normally look like comets. 6 flats were taken with my new light box, which, when combined in DeepSkyStacker, have produced a nice evenly illuminated field. 2 dark frames were also taken but their effect isn't really visible in the image. The Ring shows slight colouring and, if you zoom in, the central star is just visible. I need more focal length for this object ideally. Equipment used: Skywatcher 8" Newtonian, Skywatcher Coma corrector, Canon EOS550d.
Posted by Tim Beale 1 comment:
Labels: Planetary Nebulae, Tim Beale

M29 - an Open Cluster in Cygnus

Taken on 23.7.10, a poor night of mixed cloud and clear, with lots of thin hidden cloud and haze, which shows itself as a streaky background. I'd done some collimation on the Vixen and needed a test and this was near where the mount was pointing at the time, the middle of Cygnus. I didn't have time to get the guide system into operation for fear of cloud attack so ran 30 frames at 60sec. No flats, which would have helped the background.
Sometimes called the Cooling Tower cluster, it's not particularly inspiring, quite small too, 10 arcmin and mag 6.6, so should suit the Meade's 3500mm FL, with a big enough chip. The Vixen's is 3000mm. 30 mins is what this took, and that should be plenty for most clusters, and Cygnus is full of them.
Posted by Anonymous No comments:
Labels: Open Cluster

These are, or this is, a large nebular cloud to the left of Deneb in Cygnus.
Taken last year with the Pronto on a Meade 14" and my M25C. The exposure was 14x300sec and it was guided by the Meade and an H9C. Acquired in AstroArt and processed there and in Photoshop.
The North American is the large part to the left and the Pelican is the smaller one to the right. The Ferret is the smaller one between them around the 2 bright stars, the eyes. You need an astronomer's imagination. The ferret needs a lot of it,
the Pelican is quite clear but the North American I see as a Water Buffalo. Choose your own names if you don't like these.
Posted by Anonymous No comments:
Labels: Nebulae

I know they aren't really astronomical but then neither are satellites and space stations etc. So here is the first I've seen this year. The picture was taken from Austerfield with my Samsung M110 P&S camera at f2.8/1sec, and a chair. No processing to speak of. The little spot to the right is Venus, but you'll have to click for a larger version to see it.
Posted by Anonymous No comments:
Labels: Misc.

This is quite a bright one, recorded as mag 12.3, but being compact, about 1.2 arcmin across, is easier to catch than the number suggests.
Near the top of the sky, so well clear of the rubbish near the horizon. Taken with a Vixen 260, focal length 3000mm, and an SX M25C camera, though a smaller one would do as well. Guided by an SX H9C in a WO98 on an AP 900GTO mount. Acquired in AstroArt and processed in AstroArt and Photoshop, and not cropped. 25 flats were taken and averaged but darks aren't needed with my camera. An IDAS filter was used. The exposure was 30x120sec, 120sec to retain star colours.
The 14" Meade should manage this well enough.
Posted by Anonymous No comments:
Labels: Planetary Nebulae
Newer Posts Older Posts Home
Subscribe to: Posts (Atom)