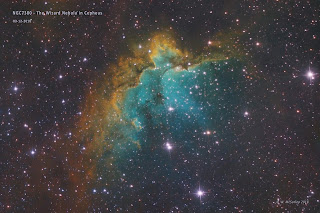 This NGC7380, The Wizard Nebula in Cepheus.
Discovered in 1787 by Caroline Herschel, NGC 7380 (also known as Sharpless 142 or Sh2-142) is the young open star cluster embedded within the emission nebula known as the Wizard Nebula. Located some 7000-8000 light years away, the Wizard nebula surrounds the developing open star cluster. Seen with foreground and background stars along the plane of our Milky Way galaxy, the nebula can be located with a small telescope toward the constellation of Cepheus (the King of Aethiopia). Although the nebula may last only a few million years, some of the stars being formed may outlive our Sun.
The active star forming region spans about 100 light years, making it appear larger than the angular extent of the Moon. A full moon would easily fit inside this view of the young cluster and associated nebula. Imaged with narrowband filters, the visible wavelength light from the nebula's hydrogen (Ha), oxygen (Oiii), and sulphur(Sii) atoms are mapped into green, blue, and red colours in the final image, a palette made popular in Hubble Space Telescope images.
Imaged over two nights, with just under 7hours of total integration time.
30x5mins Ha, 30x5mins Sii, 20x5mins Oiii plus Darks Flats and Bias. 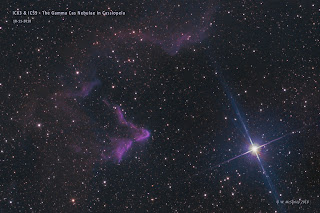 This is  IC63 and IC59, taken over the course of 3 nights last week. IC59 and IC63 are Reflection and Emission Nebulae next to the bright star, Gamma Cas, which is the star right at the centre of the “W” in the constellation of Cassiopeia; around 550 lightyears away. Gamma Cas is an eruptive variable binary star, known as a "shell star"; it currently shines at mag. +2.15, making it the brightest star in Cassiopeia.
IC59 and IC63 are both around 3 lightyears from Gamma Cas. IC63 is slightly nearer and, as a result, it's appears mostly red due to a dominance of H-alpha emission from Gamma Cas. Because it is slightly further away, IC59 exhibits much less H-alpha emission and appears mostly blue due to reflected starlight.
Both nebulae are very faint, with extremely low surface brightness, and are easily washed out by the bright Gamma Cas (this is over 5 hours exposure on the Lights).
20x300 sec Ha
21x180sec, plus 20x300 sec Sii
9x300sec Oiii 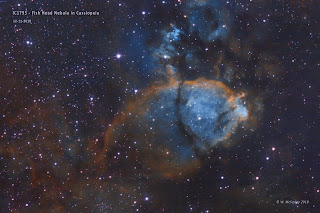 This is IC 1795, an emission nebula located approximately 6000 light-years away in the constellation of Cassiopeia. It covers a field of about 20 minutes of arc, or approximately 70 light years across.
At approximately 6000 light-years away from us, this complex extends across the Perseus arm of our Galaxy, the Milky Way. IC 1795 is a part of the large nebula complex of star forming regions that lie at the edge of a large molecular cloud.
Not far from the famous Double Cluster in Perseus, IC 1795 is easy to see and is in a very rich environment with IC 1805 (the Heart Nebula), IC 1848, and many open clusters.
This image was created by adopting the Hubble false-colour palette for mapping narrowband emissions from sulphur, hydrogen and oxygen atoms to the red, green and blue channels respectively.
Imaged over two night, this image comprises of over 7hrs of exposures, not including the calibration frames. Conditions were mixed, with many exposures being affected by cloud and mist. Stacked in PixIsight with each exposure being weighted according to its overall quality. Processed in PixInsight and Photoshop.
Ha: 40x180sec
Sii: 20x120sec plus 35x180sec
Oiii: 20x120sec plus 40x180sec


Posted by Unknown No comments: 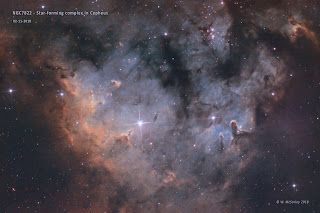 NGC 7822 (also designated Sharpless 171, SH 2-171) is a young irregular emission nebula and star forming region located in the constellation Cepheus. The complex is estimated to be some 3,300 light-years away.  The nebula is home to the young star cluster Berkeley 59, whose stars are just a few million years old. Berkeley 59 includes one of the hottest stars discovered in the vicinity of our Sun, namely BD+66 1673, which is an eclipsing binary system consisting of a very bright star that exhibits a surface temperature of nearly 45000 K and a luminosity ~100000 times that of the Sun. The star is one of the primary sources illuminating the nebula and shaping the cosmic pillars of cold molecular gas and clouds of dark dust – often called elephant trunks – which are powered by the young, hot stars, whose powerful winds and radiation also sculpt and erode the dense pillar shapes. 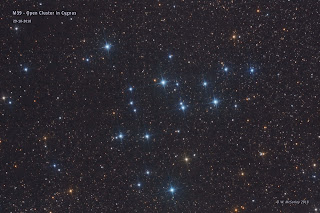 M39 (also known as NGC7092) is an open cluster embedded within a rich star field in the constellation of Cygnus.
M39 has an estimated age of 200 to 300 million years. All of its confirmed members are still on the main sequence, still burning hydrogen in their core, and have yet to evolve into red giants.
It is a relatively loose cluster, with 30 confirmed members occupying an area about 7 light years in diameter.
M39 can be located by star-hopping from Deneb to 4th magnitude star Rho Cygni, which lies some 9 degrees to the east; the cluster lies 3 degrees north of this star. The cluster can be resolved in 7×50 binoculars, which reveal its triangular shape, with three bright stars marking the corners.
It is one of the nearest Messier objects to Earth, at a distance of about 1,000 lightyears, and is approaching us at 28 km/s. Eeek!!
Imaged in LRGB, with 25x5sec through a Luminance filter and 25x15sec each through Red, Green and Blue filters. Total integration, 20 minutes. 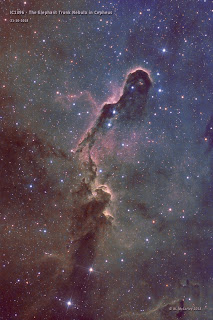 The Elephant Trunk Nebula is a concentration of interstellar gas and dust within the much larger ionized gas region IC 1396, located in the constellation Cepheus, about 2,400 light years away.
The piece of the nebula shown in this image is the dark, dense globule IC 1396A; it is commonly called the Elephant Trunk nebula because of its appearance at visible light wavelengths, where there is a dark patch with a bright, sinuous rim. The bright rim is the surface of a dense cloud that is being illuminated and ionized by a very bright, massive star that is just to the east of IC 1396A (ie, just off the top of the image).
The entire IC 1396 region is ionized by this massive star, except for the dense globules that can protect themselves from the star's harsh ultraviolet rays.
The Elephant Trunk Nebula is now thought to be a site of star formation, containing several very young stars that were discovered in infrared images in 2003. Two older (but still young, a couple of million years) stars are present in the small, circular cavity in the head of the globule.
The combined action of the light from this massive star ionizing and compressing the rim of the cloud, and the wind from the young stars shifting gas from the center outward, lead to very high compression in the Elephant Trunk Nebula. This pressure has triggered the current generation of protostars.
40x180sec Lights each in Ha, Sii and Oii filters, with Darks, Flats and Bias. Sii is mapped to Red, Ha to Green and Oiii to Blue, with the channels then adjusted to give the classic Hubble Palette. 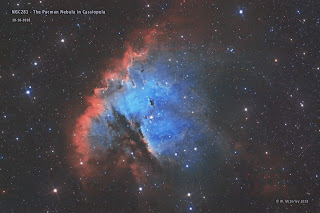 This is NGC 281, The Pacman Nebula in Cassiopeia. Also catalogued as IC 11, Sh2-184, Sharpless 184, LBN 616 and LBN 123.
NGC 281 is a bright emission nebula, and part of an H II region, in the northern constellation of Cassiopeia; it is part of the Milky Way's Perseus Spiral Arm. This 20×30 arcmin sized nebulosity is also associated with open cluster IC 1590, several Bok globules, the multiple star B1, and measures over 50 lightyears across. A recent estimate of its distance shows it lies around 9200 lightyears from us. It is known as the Pacman Nebula for its resemblance to the video game character.
E. E. Barnard discovered this nebula in August 1883, and described it as "a large faint nebula, very diffuse." The nebula region is visible in amateur telescopes from dark sky locations.
This image is comprised of 120x180sec lights, 40 each through Ha, Sii and Oiii filters, with all of the associated Flats, Darks and Bias, and represents around 6hrs exposure (not including the calibration frames). It was taken over the course of 3 nights last week.
The image was processed in PixInsight, with Sii mapped to Red, Ha mapped to Green and Oiii mapped to Blue. The colour channels were then adjusted independently to produce the classic Hubble Palette, where the red and ochre colours represent predominantly Ha emissions (with a little Sii),  with the blues and cyans representing the Oii emissions. 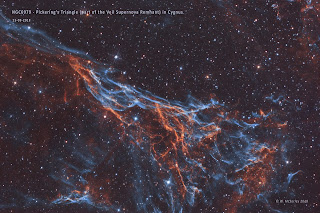 Pickering's Triangle is a small part of the Veil Nebula. The Veil Nebula is a cloud of heated and ionized gas and dust in the constellation Cygnus.


The source supernova was a star 20 times more massive than the Sun, which exploded around 8,000 years ago. The remnants have since expanded to cover an area of the sky roughly 3 degrees in diameter (about 6 times the diameter of the full Moon). The distance to the nebula is not precisely known, but data suggests a distance of about 1,470 light-years.


The analysis of the emissions from the nebula indicate the presence of Sulphur (Sii), Hydrogen (Ha) and Oxygen (Oiii). In this image, these wavelengths have been mapped to the Red, Green and Blue channels respectively; this is commonly known as the Hubble Palette (SHO). Almost all of the light from this nebula is emitted in the Oxygen wavelength, giving a predominantly blue colour.  The deep orange areas  are a mixture of Sulphur and Hydrogen.


Some parts of the image appear to be rope-like filaments. The standard explanation is that the shock waves are so thin that the shell is visible only when viewed exactly edge-on, giving the shell the appearance of a filament.


Even though the nebula has a relatively bright integrated magnitude of 7, it is spread over so large an area that the surface brightness is quite low, so the nebula is notorious among astronomers for being difficult to see. However, apparently it can be seen clearly in a telescope using an Oiii filter (a filter isolating the wavelength of light from doubly ionized oxygen).


This image is 16x180secs each Sii, Ha and Oiii, filters with Darks, Flats and Bias. Processed in PixInsight and finished in Photoshop.
Posted by Unknown No comments:
Newer Posts Older Posts Home
Subscribe to: Posts (Atom)