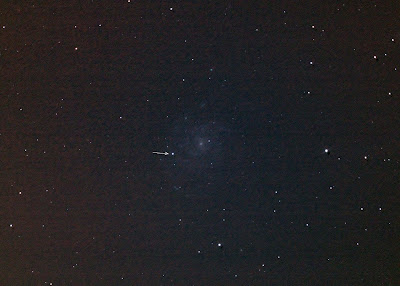 Not the best photo I've ever taken but it was just a quick attempt at finding the Supernova in the Pinwheel Galaxy (M101) before it fades. Shining at around Mag 10, it stands out easily against the dim spiral arms and is even brighter than the central region of the galaxy.
This is a Type Ia Supernova, which is an explosion of a white-dwarf star in a binary system. The Pinwheel Galaxy lies at a distance of about 23 million light years.
The image is a stack of only 3 frames (with the usual equipment) as the clouds rolled in on-cue and covered it up! Being low in the North West is also bad for me since this is the direction of Pontefract and all the sky glow that goes with it. I will return to photograph M101, minus supernova (unless there's another one!), in the Spring when it will be in a much darker area of the sky.
Posted by Tim Beale No comments:
Labels: Galaxies, Supernova, Tim Beale 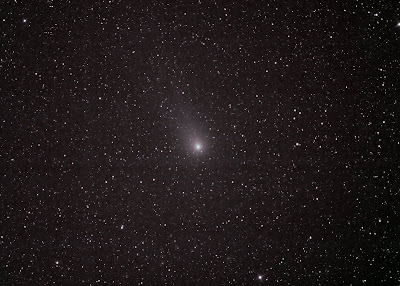 Comet Garradd is now moving from the Coathanger towards Hercules, here it is in 'no man's land' between the two. It seems to have developed a slightly more promenant tail since I last photographed it.
The image is a stack of 15 30sec exposures with a Canon EOS550D and Skywatcher 200p. A coma corrector and light pollution filter were also used.
Posted by Tim Beale No comments:
Labels: Comets, Tim Beale 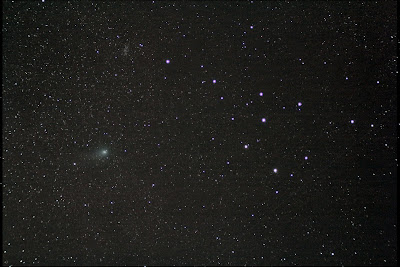 After passing M71 in Sagitta, Comet Garradd is now moving past Brocchi's Cluster (the Coathanger) in Vulpecula.

This is a stack of 15 jpegs straight from my camera, taken through a 70mm Televue Pronto refractor. The Coathanger is too big to fit in the field of view of my Skywatcher 200P! It's the first time I've used a refractor for astrophotography and the resulting image is by no means perfect, I seem to have blue halos around the bright stars. The frames were stacked based on the stars which means I've got slight trailing on the comet itself and shows just how fast it's moving. The total equivalent exposure time is 21 minutes.