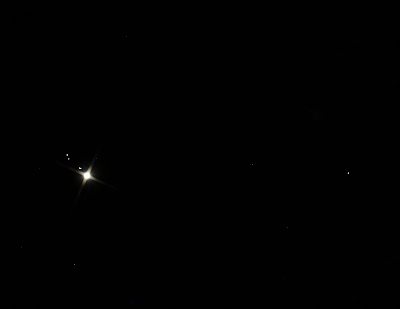 Not a spectacular image but it isn't often that you can fit six prominent Solar System objects into a field of view smaller than the Pleiades! On the left is Jupiter with the four Galilean moons, closest to Jupiter is Io followed by Europa, Callisto and Ganymede. On the right of the image is Uranus.
Taken with a Canon EOS 550d sat on my Skywatcher 200p. It was a 1 second exposure at ISO800.
Posted by Tim Beale No comments:
Labels: Solar System, Tim Beale 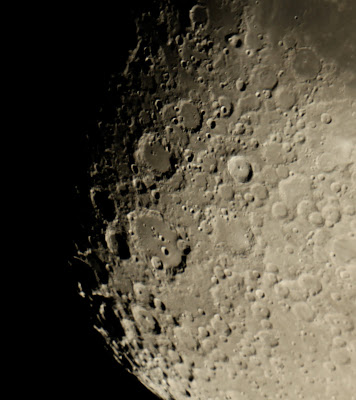 I took this image of the southern highland region using the WYAS 14" and my Canon EOS 550d. The seeing was quite bad but I managed to get a fairly sharp shot with a fast shutter speed. The craters Tycho (centre) and Clavius (with the arc of craters on the floor) are nicely illuminated. No processing has been done on the image other than cropping out the poorly lit RHS.
Posted by Tim Beale 1 comment:
Labels: Moon, Solar System, Tim Beale
Newer Posts Older Posts Home
Subscribe to: Posts (Atom)