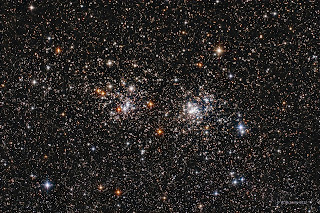 The Double Cluster is the common name for open clusters NGC 884 and NGC 869 in Perseus. The clusters are at distances of 7600 and 6800 light-years away, respectively, so they are also fairly close to each other in space. These are relatively young clusters, with NGC 869 being around 5.6 million years old and NGC 884 around 3.2 million years old. Unlike most other object in the Universe, these clusters are blueshifted and are approaching Earth at a speed of around 22 km/s.