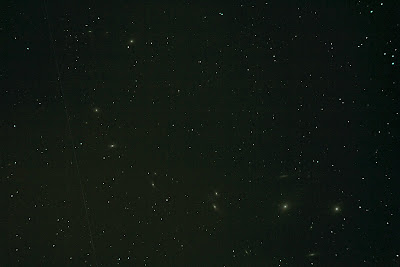 This is an image of Markarian's Chain, which is a curved line of galaxies forming part of the Virgo galaxy cluster. It is named after the Armenian astrophysicist B. E. Markarian who identified their common motion.
The galaxies include M84, M86, NGC4477, NGC 4473, NGC4461, NGC4458, NGC4438 and NGC4435. Although I can count at least 15 galaxies in the image.
I haven't identified the pasky satellite tracking through the left hand side of the shot!

The image is a stack of around 28 one minute exposures at ISO800, taken using a Canon EOS550d stuck on the back of a William Optics Zenithstar80. An IDAS LPS filter was also used. Stacking was done by DeepSkyStacker and processing by GIMP.
Posted by Tim Beale
Labels: Galaxies, Tim Beale