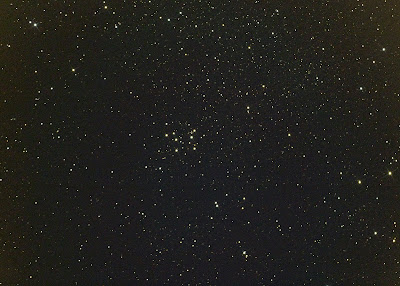 This is M29 (also NGC 6913) in the middle of Cygnus, a nice little Open Cluster with a good background of Milky Way stars. Taken on 14th August 2011, the image is a stack of 13 30sec exposures using a Canon EOS550d on a Skywatcher 200P, a coma corrector was also used. I didn't bother with a light pollution filter as there was an almost full Moon in the sky drowning out all other sky glow! It's my first image using my newly aquired Vixen GPDX mount which is a great improvement over my other EQ5 in terms of tracking and stability. Even though it was a slightly breezy night I only had to throw away 5 shots due to non-round stars and one of those was due to a pesky satellite. The images were processed using Canon Digital Photo Professional, Deep Sky Stacker and then finished off with the Gimp.