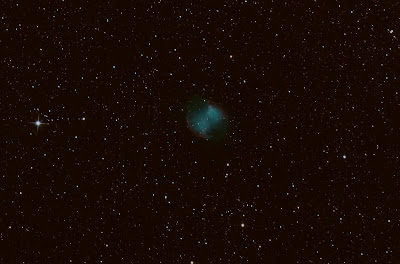 I took this image on the 4th August 2010, on a night of very good seeing conditions. It's a stack of 28 30sec. frames with darks and flats. Comparing this image to Brian's further down this blog shows how DSLRs (unmodified) are not as sensitive in the red region due to the filters in front of the sensor.
The Milky Way was clearly visible running through Cygnus and across to Cassiopeia, a rare sight from just South of Pontefract! I also saw two bright Meteors which could have been early Perseids since they both seemed to radiate from the direction of Perseus. The evening was capped off with a first look at Jupiter this season, despite being very low in the sky several cloud belts were easily visible, the SEB was still missing though.
Posted by Tim Beale
Labels: Planetary Nebulae, Tim Beale