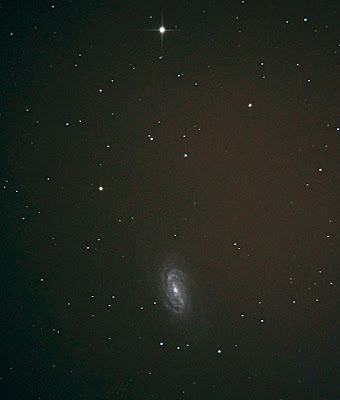 This brightish galaxy is not included in the Messier catalogue for some reason, which is strange considering some of Messier's comets apparently passed close to it. I decided to photograph this object after reading an article on it in the April 2010 BAA journal, it can be found 1.5 deg due south of lamda Leonis. Discovered by William Herschel in 1784, it's a barred spiral Galaxy lying at a distance of around 25million light years and shows many similarities to our own Milky Way.
The image, taken on 14th April 2010, is a stack of 21 30-sec exposures at ISO 1600, no dark frames or flats were included in the stack which compromises the result somewhat. The sky was heavily light polluted, possibly due to the volcanic dust cloud from Iceland, most likely it was just the usual high-pressure smog! Canon EOS550d, Skywatcher 200p, DeepSkyStacker and the GIMP.
Posted by Tim Beale
Labels: Galaxies, Tim Beale

Nice one Tim. Focusing looks good and it's not blue!