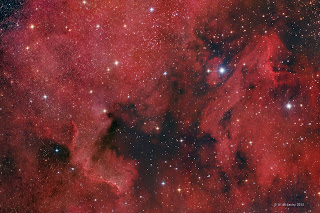 The North America Nebula (NGC 7000) and the nearby Pelican Nebula (IC 5070) are parts of the same interstellar cloud of ionized hydrogen in the constellation Cygnus. The shape of NGC7000 resembles that of the continent of North America, complete with a prominent Gulf of Mexico and the Cygnus's Wall is the term used to describe the Mexico and Central America part of the nebula; this area being the most concentrated star formations area of the whole nebula.
These nebulae are large, covering an area of more than six times the size of the full moon, and it is estimated to be about 1800 light years distance and around 100 light years across. This image is a 3-Panel mosaic covering an area approximately 3° x 2°

As part of the open day we had Rocket Launching at the Grange.

Some even get in to orbit !!

and the Planetarium was well supported with programs covering, the Solar System, Galaxy Fly Through and the Space Shuttle / Space Station.

Posted by Anonymous No comments:

Never look at the Sun through any Lens based device.  Telescope, Camera, Binoculars, WHY !
Looking at or near the Sun will cause instant and irreversible damage to your eye. Eye damage is often painless, so there is no warning to the observer that damage has occurred until it is too late.  Children should always have adult supervision while observing the sun.  Using special telescopes and filters that remove 99.999% of the harmful light you can observe and image the sun.
This image is a stack of 20 DSLR RAW images, taken using the WYAS Meade 10" SCT telescope with a Thousand Oaks Solar Filter and a Conon 40D. The core images were taken at 1/200 sec @ ISO 400, then stacked in RegiStax 6
Posted by Anonymous No comments:
Labels: Anthony Mitchell, DSLR, Sun


Comet ISON/2012 S1 is expected to be brightest around the time it is closest to the Sun; however, it may be less than 1° from the Sun at its closest, making it difficult to see against the Sun's glare. In December, Comet ISON  will be growing dimmer, but, assuming that it remains intact, it will be visible from both hemispheres of Earth, possibly with a long tail. Comet ISON  will be well placed for observers in the northern hemisphere during mid to late December 2013.  After perihelion, it will move north on the celestial sphere, passing within two degrees of Polaris on 8 January.
Posted by Anonymous No comments:
Labels: Anthony Mitchell, Comets, DSLR


As the imaging sensor on the DMK camera is small, you can only image a small amount of the moon's surface. You take multiple videos of the small area that you can see and create a series of  video files that cover the overall moon's surface. This mosaic of video image files can then be processed and assembled to create the final overall image.


This image consists of 65 video .avi files, each of 2500 frames approx. 40 seconds in length. Each video file is processed using RegiStax to create a single .tif image. These single mosaic images are then assembled in Adobe Photoshop to create the final overall Half Moon image. The effect is a clearer image than that taken by a single DSLR image covering the full DSLR frame.  Open the image and zoom in and to see the depth of the some craters and features on the moon's surface.
Posted by Anonymous No comments:
Labels: Anthony Mitchell, Moon, Mosaic 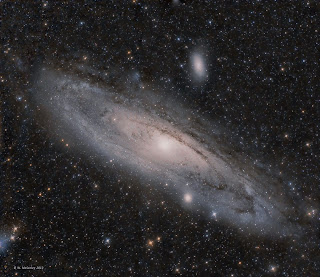 The Andromeda Galaxy (also known as Messier 31 or M31) is a spiral galaxy approximately 2.5 million light-years away in the constellation Andromeda. It is the nearest spiral galaxy to our own Milky Way galaxy and is the largest galaxy of our Local Group, which also contains the Milky Way, the Triangulum Galaxy, and about 30 other smaller galaxies. It is estimated that M31 contains one trillion stars, at least twice the number of stars in our own Milky Way galaxy, which is estimated to be 200–400 billion. 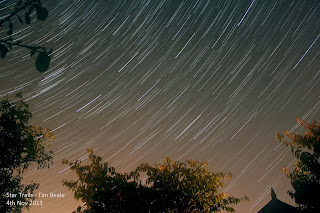 This image was originally intended to be a timelapse video of around 500 frames.  However my lens got covered in dew after around 75 shots, so I scrapped that idea (along with 425 shots :( ) and stacked them into a star trail picture instead!

It is a stack of 75 frames, each of which is a 15sec exposure at ISO 800 on my Canon EOS 550D. Long exposure noise reduction was switched on, in the camera settings, to get rid of the dead pixels and also provide a delay between shots. Stacked and tweaked in Photoshop CS5.

The Andromeda galaxy is actually visible as a smudged trail in the top center of the image.
Posted by Tim Beale No comments:
Labels: Constellations, Star Trails, Tim Beale 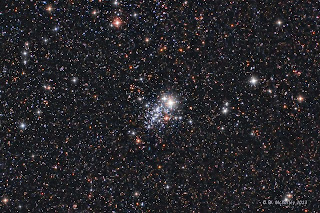 The ET Cluster (NGC457) is an open star cluster in the constellation Cassiopeia and lies over 7,900 light years away from the Sun. It has an estimated age of 21 million years. The cluster is often referred to as The ET Cluster (due to its resemblance to the movie character), or The Owl Cluster. The two bright stars, magnitude 5 Phi-1 Cassiopeiae and magnitude 7 Phi-2 Cassiopeiae can be imagined as the eyes. 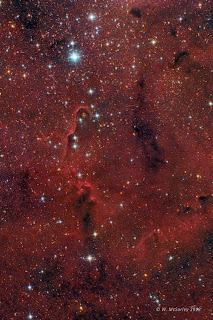 The Elephant's Trunk is a concentration of interstellar gas and dust within the much larger ionized gas region IC 1396 located in the constellation Cepheus, about 2,400 light years away from Earth. The nebula is now thought to be a site of star formation, containing several very young stars (less than 100,000 years old) that were discovered in infrared images in 2003.